The seminar “Open Education in Minority Languages: Chances and Perspectices” organized on the 7-8 of October 2015, had a the central theme to “get a grasp” on how minority languages can make use of the fast developing field of Open Education. The seminar was organized in the framework of the LangOER project and was hosted by the Fryske Akademy (home of the Mercator Research Centre).

All seminar highlights and presentations are gathered on the seminar’s Padlet page. 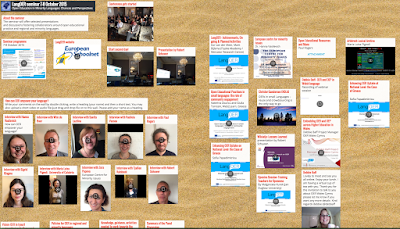 The seminar offered interesting perspectives on open education, as it brought together experts of the field of open education with minority language representatives. The fact that (most) of minority languages have limited or no access to open educational resources, urged the participants, speakers and the consortium partners, to come up with practical and creative solutions on how to empower the ” smaller languages”. The challenges often encountered by minority languages are a lack of financial and/or political support.

During the seminar, a presentation was given by Giulia Torresin and Katerina Zourou, (Web2Learn, Greece). This presentation highlighted that “the adoption of OER/OEP is much more pressing for smaller languages, which have very limited digital presence, threatening linguistic diversity and cultural diversity on a global scale”.

OER initiatives presented during the seminar

During the seminar, several initiatives were presented to inspire participants, representing various languages in Europe:

Hence, OER’s could be very valuable for these language. This also stressed the need for more OER’s which can easily be adjusted to a specific context or language ( see also the ‘Travel Well Criteria of European Schoolnet“, What makes some educational resources more useful for different cultural and linguistic contexts).

During practical sessions organized during the seminar, participants were invited to share ideas on how they see the future of their language with regards to OER in 2025 and also what the role of policy could be in this respect. The outcomes of the discussion or gathered on the seminar’s Padlet Wall.

One solution to further engage the smaller communities is to use a bottum-up approach, with true community driven engagement. A good examples is to refer to the ExplOERer project, which focuses on the: value of design of national OER repositories of small languages in creating user engagement, through social networking and game mechanics, as a means of OER expansion and appropriation. Also, to facilitate further OER uptake by smaller languages, it is important that more OERs are produced by the “bigger” languages, that are easier to use for different cultural and linguistic contexts.

On the blog of Alastair Creelman (Partner of the LangOER project, Linnaeus University), you can find more solutions discussed during the seminar, on how minority language communities can be empowered by use of open educational resources and practices.

On 7-8 October, the LangOER seminar “Open Education in Minority Languages: Chances and Perspectives” is taking place. You can find more information on the events page and you can follow all conference highlights on our padlet wall.

OER Expert Deborah Baff (Centre for Excellence in Learning and Teaching, University of South Wales) is giving a presentation during the seminar, entitled: “Embedding OER and OEP across the Higher Education Sector in Wales”.

You can also join her presentation virtually! (No need to register) Please find more information below:

Her presentation details the experience of a Universities Wales pan Wales project to embed open educational resources (OER’s) and open educational practice (OEP) across the Welsh Higher Education Sector. The project was led by the Project Manager Deborah Baff in order to meet the aspirations of the Wales Open Education Declaration of Intent (2013) the project worked collaboratively reporting to an OER Expert Group with representatives from all Universities Wales together with recognised experts in the field. The presentation will provide a brief background to the project and outline the successful delivery of all main project deliverables with the key outputs highlighted. Including:

Finally the presentation focuses on how barriers to collaboration were overcome and the importance of maintaining effective communication channels.

The seminar Open Learning in Minority Languages, is taking place on the 7th and 8th of October in Leeuwarden (Netherlands).

All the seminar highlights will be shared with you on the padlet wall: http://padlet.com/alacre/langoer1015

The seminar will offer selected presentations and discussions fostering collaborations around open educational practice and regional and minority languages.

The seminar is organized by the LangOER project and hosted by the Fryske Akademy, which is the home of the Mercator Research Centre.

We also offer for a select number participants funds to participate in the seminar, if you wish to apply for this, please fill in your motivation in our registration from.

You'll find comments, experiences and views about OER (open educational resources) in less used languages.
Blog posts are written by partner members of the LangOER project.
Posts will serve to connect to other experts, strengthening an open and participatory approach.