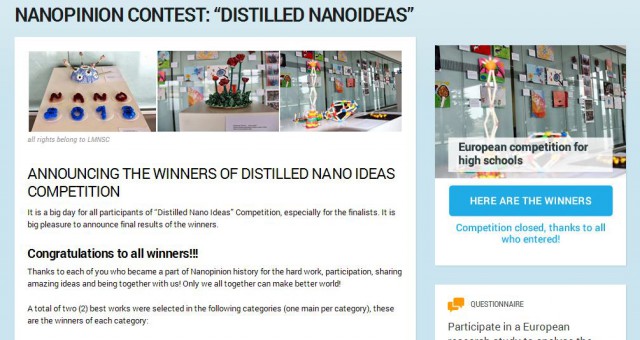 The Nano Science Club of Nisulanmäki School from Finland took part in the European Distilled Nanoideas competition with their Youtube video and won the first price in the category of 13-15 year-old students. The humouristic video deals with a futuristic targeted anti-cancer drug, which can tell the difference between cancer and healthy cells.

What made this great achievement possible? Here is the success story about how it all happened.

Distilled Nanoideas Competition was a part of the NanOpinion project. The aim of the project was to raise public discussion about the possibilities of nanotechnology and also offer free resources for STEM teachers. NanOpinion took place in fifteen European countries.

For me as a Finnish teachers’ coordinator it was a very pleasant job to inspire Finnish students and STEM teachers to take part in the competition, in which they were asked to envisage better future combining state of the art nanoscience, arts and creativity.

The Nano Science club at my school started when my colleague and biology teacher Marjaana Myllylä took part in my online course about how to teach nanotechnology. “The course got me very interested in nano because when teaching it I can easily integrate different science subjects into my teaching. I also want to give my students a useful experience on carrying out a real life project”, Myllylä said to me when she had decided to start the Nano Science Club at our school.

Students participating in the Nano Science Club were on the 9th grade. During the first meeting they studied the very basics of nanotechnology using NanOpinion web resources. Students found nanomedicine the most interesting so they also wanted to try a drug delivery hands-on experiment. Students also watched many videos and they were very impressed to see how a nanobox, made of DNA molecule, has an ability to identify cancer sells and leave healthy cells alone. They were so inspired that they decided to make their competition video about nanodrugs.

The biggest challenge for the students was the lack of previous experience on making videos. None of them had taken part in an international competition before, either. Copyright issues had also to be taken into account very carefully. Marjaana Myllylä, the Nano Science club teacher, told me that instead of spending estimated ten hours with students to make the competition movie, it took more than thirty hours to finish it.

After sending their video to the jury in Brussels, the nanostudents said that in addition to nanotechnology, they had also learnt to use iMovie, Power Point and to work in a real life project responsibly within the deadlines. For 16-year-old students it was also a great challenge to work in English because only a few learning materials were in Finnish.

Marjaana Myllylä believes that the victory gave a lot of confidence to her students. “They worked really hard! I’m very happy that my students experienced that hard work would be rewarded”, she said to me after hearing the great results. Because of the victory, Marjaana Myllylä was invited to participate in the Scientix Conference to be held in Brussels next October.

As a Finnish NanOpinion teachers’ coordinator I was responsible for inspiring and supporting Finnish teachers to start teaching nanotechnology with the resources provided by the project. So I’m sure you can imagine how happy I was to see my colleague and students at my own school really fascinated about nanoscience!

When I heard about the win of the whole competition I felt very proud of my work mate Myllylä and her enthusiastic nano students. Personally, I also felt I had succeeded as a project coordinator because I had managed to help them on their way to the success.

You can watch the award-winning video about a targeted anti-cancer drug on www.nanopinion.eu.