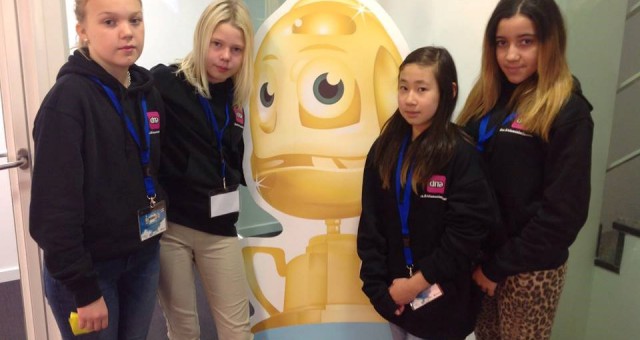 My four pupils and I had an opportunity to take part in the amazing Codecamp and Kodukup competition, hosted at the Microsoft Innovation center in Brussels on the 13-15th of October. The idea of the competition was to create (code) a computer game by using Microsoft´s KODU Game Lab and it was organized by European Schoolnet and Microsoft.  Eight teams were invited as winners of their national competition to attend the event, which was held for the first time at European level. The teams were from: the UK, Norway, Lithuania, Greece, Finland, Portugal, Estonia and Belgium. The youngest participants being 6 years old and the oldest 16. The teams had maximum 4 pupils, but half of the teams had only two members. Teams were accompanied by their teachers or their national Kodukup Ambassadors. The Codecamp included two-day workshops on Lego Mindstorm, 3D printing, card game creation and rehearsals for the final competition, which took place on the third day of the event. All the teams were eager to learn more on programming and show their skills on computer science.  During the breaks pupils took advantage of Microsoft’s Xbox room, playing games and dancing. After the full days at Microsoft we went for sightseeing and dinner, while on the second evening we visited the chocolate factory, learnt about the history of chocolate making and tasted wonderful Belgian hand-made pralines.

All the teams were amazing and it was fantastic to see how today´s children are so familiar with computers and how creative they can be. Also, teachers had an opportunity to exchange ideas and knowledge on each countries’ curriculum and ICT teaching, recognizing that coding really is a new language and is taught through Europe. It seems that teachers in Europe are truly dedicated to their work and towards their students, giving their students excellent opportunities for their future and for our future as well. This was a great opportunity for the students to learn and experience industry collaboration and to see and get familiar with Microsoft and its products, while also representing an opportunity for Microsoft to meet future coding gurus. The winner of this competition was Greece.  The two 14-year-old pupils Panos and Georgios had created an educational game called “Behind the Red”. The game is about the exploration of planet Mars and through nine different missions, the player learns basic information about Mars, while seeking more advanced knowledge through answering related questions. The game has 3 action terrains, 9 levels, 195 lines of code and it took 270 hours of work.

My team, consisting of four 12-year-old-girls was extremely happy for this opportunity, recounting that “I have learnt so much; Programming, English, teamwork and job opportunities. We have seen how pupils from different countries are alike and how smart they are. We have enjoyed every minute, met new friends and had a lot of fun too”, and that “Now when we know more and have more skills we will develop our game (Girly Mars) a way further and come back next year. It was a little bit challenging to be only-girl-team but all other teams and boys were really helpful and polite towards us. I think this industry needs more girls”.