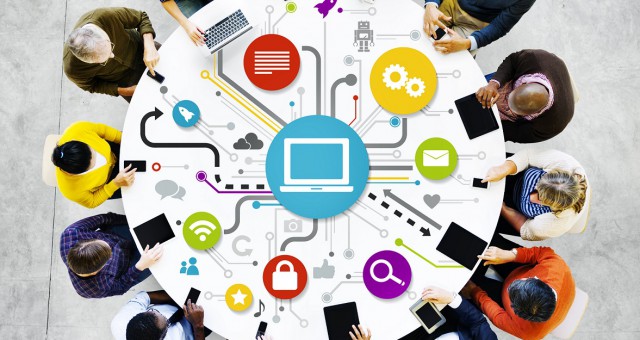 A distinctive characteristic that distinguishes 21st from 20th century education is the emphasis on inclusivity where everyone has the right to be provided with equal opportunities for education and an important part to play and contribute in society.  In the philosophy underlying 20th century education, Barber (2013) states that differentiation and up to a certain extent segregation was accepted as the rule of the day. Thus school systems that categorized, segregated and branded students for a professional, semiskilled or unskilled track for life were acceptable and went undisputed. In the 21st century this is not afforded anymore. As work becomes more automated and unless people are well educated and equipped to be flexible and deliver according to ever changing economic scenarios, a lot of them may possibly end up being unemployed. In the meantime as we celebrate equal opportunities for all, digital technologies are considered by many to be an important vector to achieve this aim, reach and accordingly stimulate opportunities for more to learn more and achieve better in life.

With the inexorable diffusion of digital technologies in various aspects of society and especially when looking at our students; who as time goes by are mediating as educators, feel compelled to adopt and use them more in educational contexts. Several teachers also believe that such technologies can make a difference. In 2009, a poll on the Digital Learning Environments website (now closed) showed that many teachers believed that digital technologies enhanced various aspects of learning such as the support for project based learning (38%) and improvement of critical thinking skills (29%). Twenty four percent (24%) considered that formal digitally mediated learning also enhanced the ability to communicate. In April 2013, the published results of the Survey of Schools managed by European Schoolnet and University of Liege: Benchmarking Access, Use and Attitudes to Technology in Europe’s Schools*, concurred similar outcomes. As a matter of fact the survey; involving teachers from 31 different countries indicated that besides the students, teachers‘ opinion about the value and impact of ICT in educational settings and for learning was “overwhelmingly positive”. Interestingly enough while lack of ICT infrastructure seemed to be a major inhibitor to use, no overall relationship was found between high levels of infrastructure provision and student and teacher use, confidence and attitudes. Saying it differently the presence of technology did not seem relevant to teachers’ perceptions of use in educational contexts.

The way I see it is that as digital tools and applications diffuse and proliferate more into educational contexts, educators have to be able to decide and distinguish between various technological qualities and associated behaviours that are best adapted to use and teach a specific concept. Definitely, I do not believe that this is an easy task and the situation cannot be portrayed better if not by Palfrey and Gasser (2008) when they say that:  “Despite the saturation of the digital technologies in many cultures, no generation has yet lived from cradle to grave in the digital era.”  So while on one hand most, if not all, of those who are currently teaching have been taught without or with very limited reference to digitally mediated learning behavior, they themselves are facing a different learning scenario where they must learn how to adopt and adapt to such new pedagogies at the same instant as the scenario is undergoing continuous change.

I do not believe that there is one solution. Definitely, adopting the book approach where written notes and traditional learning attitudes are transferred to a digital environment does more harm than actually release the potential of digitally mediated learning. Educators have to look beyond the digital tool itself and focus more on the ‘process’ to enhance the learning experience through the technology chosen. For the sake of the ‘process’, possible directions that may be employed in enhancing learning through the use of technology would be a shift in focus from the actual technologies themselves to their inherent properties that maximize the utilization of Web 2.0 enabled behavior (our younger generation have in the meantime been fervently manifesting in their private spheres) to educational contexts. One way on how this can be achieved is to zoom in and with the technology as a backdrop focus on those qualities that can be actively extracted and meaningfully extrapolated to directly involve the students as active builders in the learning experience.

The Partnership for 21st Century Skills mentions four important competencies, which can be used as guidelines at the core of digitally mediated learning processes. These include: Communication, Collaboration, Critical Thinking and Creativity. I prefer to include four more: Convergence, Communities of Learners, Connectedness and lastly but not least, Cloud Computing which, as we come to lean and depend more on remote spaces and applications to do and save our work to, is becoming more pervasive and integral in our day to day activities.

There is no specific order how these Cs can be interpreted but considering them briefly and individually then, Communication is easily facilitated by digital technologies allowing students and teachers to employ a continuous live dialogue independent of space and time. In the process, both parties will develop and enhance other qualities such as Creative writing skills, vocabulary, better articulation of thoughts and ideas, enhancement of self-expression and Critical Thinking acquired through the responsibility of having to publicly write in social media for others to read and evaluate. Subsequently teachers can also take advantage of the web and ease of Connectedness between people to establish Communities of learners and practice, fostering and establishing ideas of Cooperation and group work.

The alienation from the process of learning to the emphasis placed on the difference of one digital device to another does not fare well for digitally mediated learning. As a matter of fact I believe that in digitally mediated learning environments Convergence should be strongly meaningful. With the rising trend that technologies with distinct functionalities are evolving to technologies with common characteristics, then the overlapping of one elicited attitudinal shift into another is only liable to the interpretation of the user.

I believe that the core content material and knowledge have always been there and besides minor tweaks, it is quite unchanging. On the other hand the process by which data and facts are meaningfully transformed to knowledge need to be seriously reconsidered in context of these digitally catalyzed attitudes. Learning, higher order thinking and conceptualization that call for a larger chunk of the population to make that independent quantum leap forward for change, adaptation and development, needs to be drastically interpreted in context of the world we are living in.  In a very tangible reality of a global village where the ‘cough’ of a country will cause other economies to catch a cold, where partnerships, cooperatives and foresight thinking and planning are becoming more relevant, enhancing the learning process from its roots by understanding and embedding the Cs at the core of our teaching activities and through other window of opportunities uniquely presented through digital applications, would help bring that much required attitudinal shift. I consider myself lucky to have rubbed shoulders with many able educators and active practitioners in the field of education. As a matter of fact I believe that if we as educators are creative and employ any of the Cs in our digitally mediated learning environments with what we have available at hand, then a lot can be achieved.

* The survey is available at: