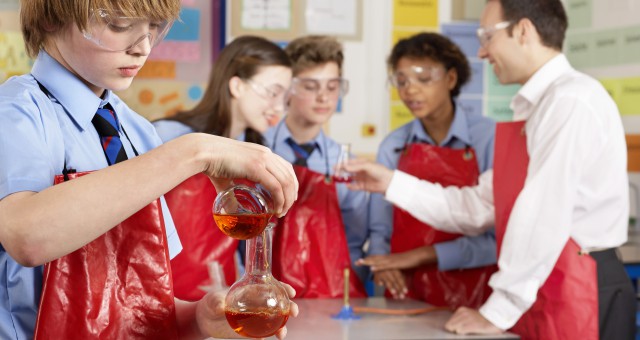 Let’s face it: physics and chemistry are not considered as major subjects for most pupils in lower secondary schools in France. Not so surprising, as pupils are only granted one hour and a half lesson per week from Grade 6 to Grade 9, which is hardly enough to give them a scientific spirit. Furthermore, it is impossible to perform experiments under satisfactory security conditions if the class is not spilt in 2 groups, which has become less the rule, because budgets are currently being reduced. Science really needs to gain consideration.

That’s why teachers in physics and chemistry from all the lower secondary schools nearby my high school (lycée Marguerite Yourcenar in Erstein, France) have decided to organize a competition: a test to be taken at the end of Grade 9 in physics and chemistry and common to all the six lower secondary schools. As a reward the best pupils will participate in a practical session at my “lycée”. Moreover, the 3 best ones from each school will be given a lab coat, which they are going to wear every week during the following year at the practical sessions in chemistry.

So, last Wednesday, on the 17th of June 2015, our laboratories were occupied by pupils younger than usually. My colleague Anne-Laure and I had chosen with care 3 experiments to raise enthusiasm.

In chemistry, pupils were all so happy to look like real scientific researchers, as they had to wear not only a coat, but also goggles and gloves: this was all new for them and they enjoyed it! The experiments were particularly striking:

As for physics, pupils could find out the diameter of their hair thanks to the diffraction phenomenon. Diffraction takes place when the light encounters an obstacle or a slit. In this case, the obstacle was one hair. The pattern on the screen is made of several bright spots with dark areas in between. The central spot is the brightest, and its length L can be linked to the size of the hair a. So pupils made measurements to spot a versus  L on a spreadsheet.  What a fun it was to find out the size of their own hair!

This competition has taken place for 3 years now, and it has been a great success. Pupils that are not interested in science are not eager to participate in such a competition in the first place, but some get caught up in the game. And the winners are so proud to be greeted and congratulated by the headmaster of the lycée where they are going to study the following year, and to perform experiments in real labs! We all think that this kind of events can arouse pupils’ interest and curiosity in Science … We need lots of scientists, so let’s move on!