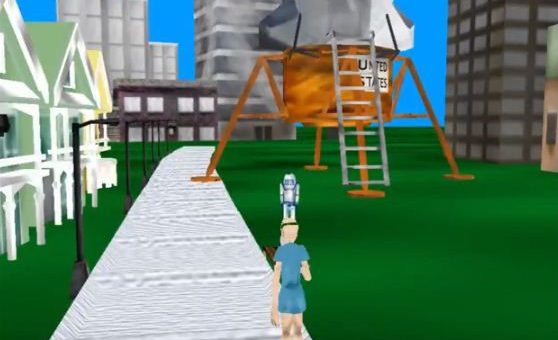 Abstract: An inquiry-based learning project was developed using Alice 2, a free 3D programming environment. The aim of the project was to createa gamified telling of astoryabout time in science. Students inventeda 7-level game based on time: changes over time/evolution in biology and special relativityin physics.

One Sentence Summary: A mixed group of 16 students, 14-18 years old, was engaged in programming using a gamed-based project on time in science. The final objective wasto develop programming skillsstarting from a real problem.

Serious games and virtual worlds give great support and improvement tolearning, they encourage students to realize, produce, and imagine by doing [1, 2]. The use of immersive learning environments stimulates the development of new approaches, such as pair programming, collaborative learning, and multidisciplinary thinking.

We are reporting here an after school project, consisting of 20 class hours, with 16 students,14-18 years old, coming from different high schools. Students were divided into groups of four. Each studentwas assigned a role: leader, recorder, checker, press secretary. They were of mixed ages and digital and scientific skills (the high schools were a lyceum and an agricultural technical institute). Each group was then subdivided in a subgroup of two students (pair programming). Students were free to move inside the classroom, download materials, search on the web, and use their device.

For the first 15 minutesof each lesson, the groups discussed their progress with other groups and the teacher, planning the objectives for the day.

The teaching methodology is IBSE, inquiry based scientific education, broken down into the following steps: engage, explore, explain, elaborate, evaluate.

The learning objectives are: the development of digital skills, cooperative learning, scientific numerical simulation, the learning of programming language, discussing the role of time in science from evolution in biology to relativity in physics.

A Facebook group was created for the duration of the project. It acted as a means for communication between students for sharing information, asking questions, solving problems, and helping each otheraround the clock.

Our project on time: a 7-level gamified telling of a story

Alice (here used in version 2) is a free 3D environment [3], very effectivein introducing programming. With Alice you can create a 3D object (from a library, or creating one using Blender as we did), integrate it in the world, and program the actions ofthe object or a single part of the body. You can also define an object’s interaction with the external world, such as a collision or disappearance [4]. The initial engaging activity was the vision and analysis of some simple projects inside the Alice forum community. It was a pretext for introducing simple object programming and discussion about a game and a storytelling design.

Our project was on time in science. The exploration phase was to do research (websearch, booksearch) onhow time is represented in science. Time is an important variable in physics; in classical mechanics it flows uniformly, while in relativity its flow depends on body velocity. In biology, time is synonymous with change.
The students thoroughly researched the topic with their teacher, talking not only about science, but even literature and philosophy.

The first, second and third levels were on the creation of theEarth, until its cooling and the creation of organic forms.
The fourth and fifth levels were an actual game, a virtual world where you are a bacterium and you have to stay alive in order to evolve into a fish (your avatar), see Figure 1 below, and finally into a frog to conquer the mainland.

The fourth and fifth levels were an actual game, a virtual world where you are a bacterium and you have to stay alive in order to evolve into a fish (your avatar), see Figure 1 below, and finally into a frog to conquer the mainland.

Figure 1. Level 5, your avatar is a fish and you have to stay alive, shooting other fish, to complete your evolution.

The sixth and seventh levels described the evolution to homo sapiens passing through dinosaurs and mammals. The story ended with the relativity time concept, introducing thetwin paradox, see Figure 2 below. Figure 2. Level 7, a final ending with a story on the twin paradox in special relativity. The time flow depends on the observervelocity.

During the entire project, students started programming working on functions like “if”, “loop”, “do while”, “collision” (Figure 3) and the concept of java classes (unknown to students). One of thefinal projects is visible on YouTube [5].

Figure 3. Code for levels 4 and 5: you are confined in a particular sea region and your objective is to collide with other avatar to win your evolution. Students were not familiar, before starting the project, with object-oriented concepts.

Students familiarized themselves with math concepts like random walk (used to move fish in the fifth level). In biology, they focused on evolution and in particular on DNA, bacteria, cells and dinosaur extinction. They stressed an important point: when the fish evolved – from the water into the frog – this was discussed with problem-based learning approach (Wasthe body of water a lake? A river? A sea? Was the evolution gradual?) They also reflected upon a non-linear evolution concept, about external conditions for life. In physics they were encouraged to study a complex theory like special relativity, and some misconceptions emerged like time as a spatial variable, connected only to movement.

Analysis of the didactic approach

Gaming and the virtual world are a motivating and “realistic” environment where students can conduct experiments and simulation. In our experimentation, Alice was an iconic and procedural facilitator. Students are more motivated to study scientific subjectswith a tool that they consider fashionable, familiar (ex. games), easy to program (Alice IDE provides a drag and drop editor to create code to animate objects, so avoiding syntax error is simple). Students learned Alice through many free tutorials on the Web [6].

In a 3D environment, teachers can easily create a lesson through storytelling, introducing computational thinking, realizing flipped learning and in some scenes a series of quizzes. In our approach, students are not passive users, but the learning process becomes the application of real cases, where students are stimulated to reflect, analyze, and learn by doing. The role of the teacher is to guide their tinkering into a specific channel. In Alice, programming is easy and students can suddenlyse the results of their action, so they can enrich their animation with content, graphics, and quizzes.

A user-friendly tool like Alice, in our cases tudy, encouraged students to talk about biology, physics, and philosophy. During the entire project, students had to study scientific concepts found in the teaching materials, online or in the classroom, and this is not so obvious for students who are accustomed to learning practically, through experience.
Alice is coherent with the philosophy: let them play first, let them achieve something, let them be creative, let them learn by doing.

In the future, we want to introduce programming for other disciplines, like art, literature, and history, using Alice or other tools, like Opensim for Virtual Worlds. Alice will only be a tool to motivate students, through gaming and animation, to learn programming (and we will introduce Java next year) and numerical simulation,while working on complex scientific concepts.

Article written by: A. D’Ambrosio